Anna Zhilyaeva performs all around the world. Her shows consist in producing an artwork in virtual reality in front of an audience which can see the process live projected on a screen. In June 2018, she recreated a classical painting live at the Louvre museum during a three hours performance. In August 2019, she performed live in front of 45.000 spectators at the Worldskills 2019 opening in Khazan. 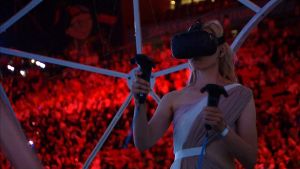 At the age of 14, she left home to enroll at the fine art school of Orenburg (Russia) with two year in advance, and graduated successfully after five years, youngest of the school. With her title of “Artist painter, fine arts teacher” and eager to learn, she then moved to Moscow to attend the Academy of Arts where she studied sculpture and painting restoration. She then studied one year of architecture at the university of Orenburg, one year at the University of Cinema and TV of Saint Petersburg, validated (in one year) a three years diploma of fine art at Herzen University, Saint Petersburg, Russia.